On Republic Day, US Embassy In India Shares Melodious Rendition Of Vande Mataram 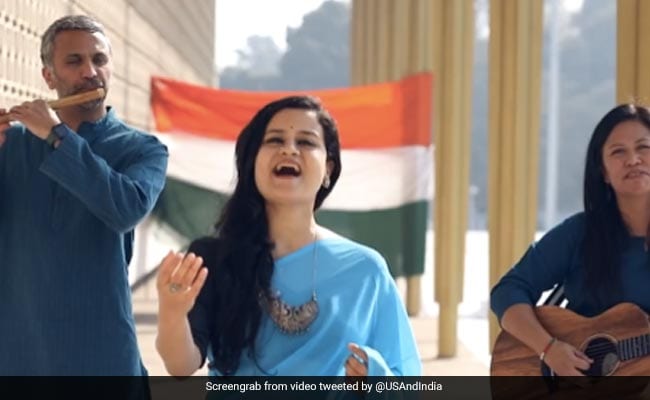 As India celebrates its 74th Republic Day, the US embassy in India commemorated the occasion by sharing a melodious rendition of India’s national song ‘Vande Mataram.’ Taking to their social media handles, they shared the melodious song, crooned by singer and composer Pavithra Chari, who was featured on a 2023 Grammy-nominated album.

The singer was accompanied by two US diplomats on the instruments. In the video, US officer Raghavan was seen playing the flute while Stephanie was on the guitar.

“Happy 74th Republic Day, India! We are celebrating #RepublicDay with a rendition of the national song Vande Mataram! US Officers Raghavan (flute) & Stephanie (guitar) team up with @pavithra_chari, the singer featured on a 2023 #GRAMMYs nominated album,” tweeted the embassy while sharing a video of the rendition.

India is celebrating its 74th Republic Day which commemorates the adoption of the Constitution of India on January 26, 1950. Republic Day 2023 celebrations are taking place on the revamped Central Vista avenue and are the first at the ceremonial boulevard after Rajpath was renamed to Kartavya Path last year. Egyptian President Abdel Fattah El-Sisi will be the Chief Guest at the Republic day parade.

A total of 23 tableaus depicting India’s vibrant cultural heritage, and economic and social progress are part of the ceremonial parade.

Featured Video Of The Day

Lollapalooza India: Everything You Need To Know

No comments to show.

Bakhmut, in the eastern region of Donetsk, is currently the epicentre of the fighting in Ukraine.New Delhi: Ukrainian President Volodymyr Zelensky on Friday invited the...

10 Best Islands to Visit in Malaysia

Malaysia is well known for its iconic Petronas Towers and glitzy capital city, but there’s a lot more to the country than commercial high-rise buildings....

Tell Me About Yourself. The Right Answer.

"Tell me about yourself" seems a straightforward enough request in a job interview. However it can be a difficult question to grapple with - there...

‘The Last Of Us’ Gets Official Season 2 Renewal At HBO

The Last of Us is getting a second season at HBO. HBO has officially announced that it has renewed its live-action adaptation of Naughty Dog’s...

Mary Catherine’s first birth, the birth of her daughter, was a traumatic, vaginal hospital birth. It was nothing like the unmedicated, peaceful, yogic birth she’d...

10 Best Islands to Visit in Malaysia

Tell Me About Yourself. The Right Answer.

‘The Last Of Us’ Gets Official Season 2 Renewal At HBO